When we were young, we were promised that the future would be a time in which convenience and leisure would become the only priorities in any of our lives.

An endless succession of television shows that extolled the virtues of technology and the computer revolution promised all of us that our days would be free from toil and that our work-life balance would somehow miraculously even itself out and that we’d get to spend as much time expanding your personal horizons as we did in the office or on the factory floor.

It was a vision full of wonder that painted a picture of a world that we all desperately wanted to live in and like everyone else who fell under the sway of that promise, we couldn’t wait for it to arrive. That future has been a long time coming and we’re still waiting for it.

It isn’t all doom and gloom though, and even though we’ve all still slaves to grind and trapped on the Sisyphean wheel of a nine to five existence, the liberty that the internet has imbued us with has helped us to embrace the digital age.

That said, we always thought that a computer-based society would have been ushered in by legions of shining robots, who according to Asimov’s Three Laws, would have freed us from the menial tasks that our lives drown in, and by doing so would have welcomed in the golden tomorrow that we’ve all been waiting patiently for.

The computers are here, they’re a part of our everyday world, but so far there’s no sign of the robots that a thousand science fiction films and countless genre stories assured us would have been living and working alongside us for decades.

Or is there? The simple truth is, those robots are already here and they have already started to change our world.

Okay, so the robots that are becoming an increasingly common, and popular, part of society aren’t the sort that George Lucas, Arnold Schwarzenegger, and James Cameron popularised with their big-screen fantasies.

Instead, they’ve taken over the manufacture of increasingly difficult to assemble automobiles on factory floor production lines, they explore and chart the ocean depths and they even clean our homes.

Wait, did we just say that robots had started to clean houses and do all of the chores that most of us hate doing?

While they’re not able to dust shelves, do the dishes, and change bed linen (at least, they can’t do that yet, but we’re not giving up on the idea that robots will soon be able to do all of those things), robots have taken over from the conventional vacuum cleaner and can now clean the floors of your home.

Even though being liberated from having to vacuum the floors is only a small freedom when it presented itself, it was one that we seized with both hands, and we’re willing to bet that you will too.

That’s why we put two of the best robot vacuum cleaners through their paces to find out which was best, so that you could embrace the same freedom that we have, abandon your vacuum cleaner and entrust the vacuuming of your floors to a robot. 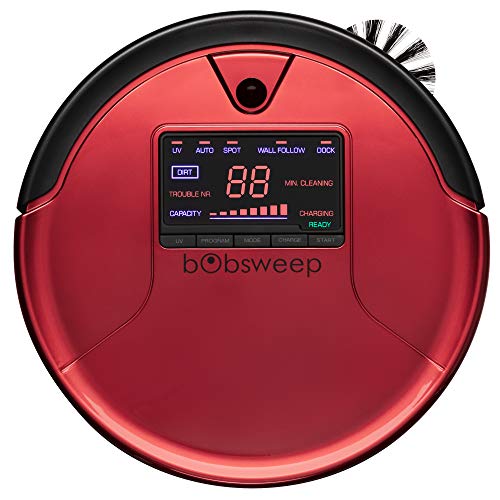 The first robot that we let loose in our home was the bObsweep, or as it’s more commonly known by its manufacturer, Bob.

The PetHair is the heavy-lifter of the Bob family and the robot that can and will, according to bObsweep do it all, at the same sort of price that you’d happily pay for a good vacuum cleaner.

And, they’re not exaggerating, because as long as you can keep one eye on Bob while he’s scooting around vacuuming your floors, he’s a great and incredibly fastidious cleaner.

As soon as Bob is fully charged he’s ready to go, and he’ll randomly begin to make his way around the room that you’ve got him in, sweeping as he goes.

Able to hold around a liter of dirt, dust, and pet hair, Bob will keep on cleaning until he’s full, or he runs out of charge and when either of those things happen, he’ll make his way back to his charging station and switch himself off until he’s either emptied or recharged, at which point he’ll be ready to start cleaning again.

On a full charge, Bob will run for around sixty minutes or so and happily suck up and vacuum anything in his way, and if we’re honest we grew sort of attached to the little guy during the week that we let him loose to sweep and clean.

We’re also aware that we’ve started calling the robot he, we don’t know when it started happening, it just did. And if Bob starts cleaning your home, it’ll happen to you too.

It isn’t all robotic milk and honey though, as even though Bob can hard charge his way around hardwood, laminated, and vinyl flooring, he does tend to get stuck on carpets.

The longer the carpet is, the more he’ll get stuck and when he does get stuck, you’ll need to wipe his trouble code (which is easily done with a touch of a button), which resets his cleaning cycle and as soon as he’s reset, he’s ready to go again.

He’ll also mop and has full seven-day programmability, so you can let him know when to go and he’ll do the rest.

As he’s not the brightest of robots, being able to program Bob is a blessing, as he’ll just set off and do what he does when you want him to.

And even though he wanders around aimlessly, we have to admit, he did make sure that our floors stayed clean.

Don’t ask us how he knew where to go, but he did and Bob ended up, with a little bit of help when he got stuck doing a better job of vacuuming our floor than we ever did.

Much as we hate to admit it, there was a world of difference between the Roomba and poor old Bob.

Maybe that’s because the Roomba was closer to our idea of what a robot should be, or maybe it’s because it was a lot more functional and could adapt to its surroundings better than Bob did.

Whatever the underlying reason was, when it came to vacuuming the floor, the Roomba came, saw, vacuumed, and conquered.While Bob seemed to wander around without much direction or purpose, the Roomba, after a couple of days of cleaning had pretty much mapped out our floors and “knew” it’s way around, and thanks to its inbuilt dirt sensor, it knew where to clean and when.

Because it learned its way around the house and was able to navigate its own path it “learned” to avoid going to the places where it knew that it would run into difficulty and had previously become stuck in, which meant that we didn’t have to worry about it anywhere near as much as we had to about Bob.

The Roomba seemed to have a longer run time than Bob did too, and would regularly run for an additional thirty minutes or so before it had to return to it’s charging station to juice up so that it could start again. The best thing about the Roomba though was that it seamlessly connected to the house WiFi, and while iRobot is keen to point out that it can be voice-controlled via Alexa, as we don’t subscribe to the home control model that Alexa embodies, we can’t verify the claim as we don’t have Alexa.

Having tested out and used the SmartPhone app that grants you full control over, and the ability to program the Roomba from the comfort of your favorite armchair, we don’t doubt for a single second that if you do have Alexa, you’ll have full voice mastery over the Roomba.

And just like Bob after the Roomba had spent a week in our house, we can confirm that the floors had never been cleaner. Apart from the time Bob spent cleaning them.

Trying to ascertain a victor or which robot vacuum was and is better is a tough call.

While it seems like an easy decision on paper, as the Roomba was more efficient, functional, easier to use, and ultimately was infinitely more hassle-free than Bob was, when it came time to pack it away and go back to the more conventional way of doing things, we didn’t miss it anywhere near as much as we missed Bob.

If you’re simply looking for a robot vacuum cleaner that you can set up and leave alone to do what it does best without having to worry about whether or not you need to help it because it’s got stuck again, then hands down, no questions asked, you’ll adore the freedom that comes with the Roomba.

However, we can’t shake the idea that Bob was somehow, and we know it sounds ridiculous, far more “human” than the Roomba, and on that basis, we’d always find room for Bob regardless of how much more advanced the iRobot was and is.

Ultimately though, the choice of robot vacuum is yours. But when you make your choice, don’t forget about Bob. We won’t.